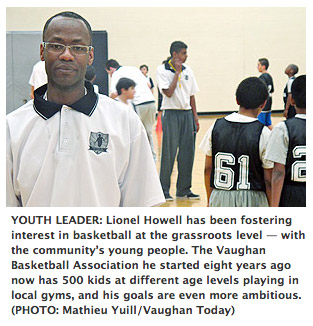 Posted at 09:58h in News Articles by admin
2 Likes

Kids are running all over the place. It’s a Saturday morning at Maple High School and in the gym about 100 boys aged six through ten are going through basketball drills and playing games.

Lionel Howell, an inside sales person by day, walks across the courts waving at parents, shouting out instructions to kids and giving advice to the high school and university-age coaches. He does this without missing a stride — literally. He’s doing all this while stepping around errant basketballs and kids that flock to him like characters at Wonderland.

Howell started the Vaughan Basketball Association (VBA) eight years ago with a simple goal: to bring the sport of basketball north of Steeles Avenue.

“A friend of mine and I started it after having what was the Vaughan Basketball League, which was just an organization for kids to play basketball,” he says. “ My son used to watch me play in men’s leagues. Like every other kid in Vaughan he played soccer but he was the kid in the corner picking daisies.”

His son started telling him he wanted to play basketball, Howell says.

Vaughan has a plethora of hockey and soccer leagues but eight years ago only a handful of outlets for kids interested in basketball existed. Howell says this is the first generation of kids to have grown up always having a professional NBA team in the area, so the interest is here and growing the sport at a grassroots level via kids playing the sport in organized leagues is logical.

But after sitting with Howell, it’s easy to see the VBA is more than just a place for kids to act out their Steve Nash and Kobe Bryant fantasies on the court. It’s actually much bigger than that.

An 8-year-old boy walks up to Howell to say hello. Earlier in the month Howell had asked his parents if he wanted to move up to the 9- and 10-year-old bracket because he clearly had the highest skill level for his age. He did but he went from being the big fish in a small pond to being one of the smallest players on the court.

His parents were worried he wasn’t having a good time in the older age group. As the boy walks over, Howell puts out his arm and the boy snuggles in.

“Are you having a good time in the new age group?” Howell asks.

The boys nods and says he is. Howell asks him if he’s sure. It looks like he isn’t having as much fun and maybe he’d like to go back to his own age group.

The boy protests. The games in the older age group are longer and he gets to play more — he’s having a great time.

The boy’s mother and father break out wide toothy grins. They hadn’t been able to get such an open and honest response from their son. Howell was able to have a conversation with the boy the parents couldn’t. It’s clear a weight of anxiety has been lifted from their shoulders. Everyone wants their children to have fun playing sports but sometimes it seems impossible to help facilitate that.

Howell says he’s able to connect with the kids in the VBA differently than how parents can.

“I can tell them things about studying in school, staying healthy and being a good person that their parents have told them but they haven’t listened,” he says. “But as their coach, they listen to me. It’s a big responsibility.”

Every kid who participates in the VBA gets a trophy at the end of the year. Howell says when he was a young man playing soccer in Hamilton his team earned a playoff trophy and he cherished it. It sat on his shelf and he looked at every day.

“Everyone gets equal playing time here — the slowest kid in the gym, he gets a turn to be point guard and take the ball up,” he says. “It is not about winning, it is about the kids having a fun, positive experience.”

For those who yearn for more competition there is a rep team where skill development is emphasized at a higher level and success in tournaments and leagues are the goal.

Eight years ago the VBA had 50 kids in one gym. Now there are almost 500 across two gyms and in more age groups. In another eight years Howell hopes the VBA will have helped build the sport in Vaughan and continues to be a financially accessible sport.

A few more families walk by and each one flashes Howell a big smile and waves. He may not realize it but a lot of the success is a testament to how hard he’s worked to grow the game from a place of inclusion instead of a place of competition.

If he keeps up the same attitude there’s no reason basketball couldn’t surpass the participation rates of some of the other traditional sports in much less than eight years.